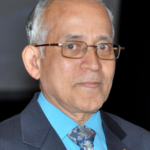 SATTUPATHU V SANKARAN worked in the industry for more than 30 years, including IBM and BHEL, India and Westinghouse, Electric Power Research Institute, and Duke Power USA. He was senior professor and associate dean at IIIT -Bangalore before moving on to corporate IT consulting for Daimler Chrysler, Infineon, Yahoo and SAP Labs. Sankaran received the Society for Computer Simulation Industry Technology Award in 1992. Sankaran served in the IEEE Bangalore section, rising to chairman (2002-2003). He received the IEEE Millennium Medal and was also conferred the Golden Core Member of the Computer Society in 2010, among several other recognitions.