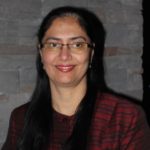 Vasantha Erraguntla received her Bachelors in Electrical Engineering from Osmania University, India and a Masters in Computer Engineering from University of Louisiana. In 1991, she joined Intel’s ASCI Red Teraflop machine design team and worked on its high-speed router technology. Over the years, Vasantha engaged in various advanced prototype designs at Intel Laboratories, implementing and validating research ideas in high-performance, low-power circuits and high-speed signaling.

From 2004 to 2011, Vasantha led Intel’s Bangalore Design Lab with a charter to innovate, build and demonstrate high performance and energy efficient technologies via silicon prototype development. The team showcased several world class technologies which went on to receive world-wide accolades in the form of awards, papers, patents and technical press.

Vasantha joined the Intel Architecture Group in 2011; in 2013, she was appointed as the Director of Technology Path-finding for Intel’s Market Enabling Solutions team. In 2015, Vasantha joined the Embedded IP Subsystems and Chipsets Group as their Strategy Program Director.

Vasantha balances her career with dedicated and heart-felt community service, something that she is very passionate about. Within Intel, she is a mentor and coach to many, especially women and is frequently teaches employee and manager / leader classes. She led the Diversity and Inclusion (D&I) charter at Intel India from 2004-15. Under her leadership the site made great strides in hiring, retention, growth and development of women. It has broadened its vision from promoting women to promoting diversity and is now on the journey of inclusion. Outside, Vasantha represents Intel as its D&I ambassador and is often invited to speak on Inclusive Leadership. She has volunteered with various organizations advocating and promoting girl-child literacy, women’s empowerment and STEM education.